Severance, the ultimate work/life balance horror story, concluded its first season with a dramatic ending on April 8th, and man, do we have a lot of questions about what occurred. The Ben-Stiller-directed dystopia, starring Adam Scott, was always unsettlingly polished and sterile.

But now the grotty, hidden side behind the sheen is being revealed, and it has the potential to endanger people's lives – both at work and at play. However, as we wait for season two, we must now wait to see if we will ever get answers to some of our most urgent problems. Everything you need to know about Lumon Industries” innies' future may be found right here. 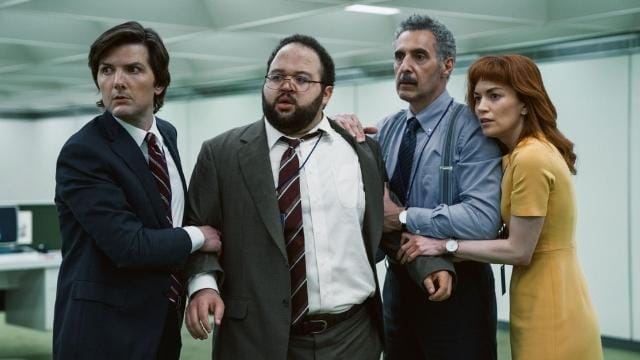 What Will Be the Focus of Season 2 of Severance?

Season 1 of Severance ended on a cliffhanger, with Mark, Helly, and Irv's Innies on the outside all having shocking revelations just before Mr Milchick tackled Dylan and sent them back inside. It would be cruel for Season 2 to do anything other than pick up the story exactly where we left off, and that is exactly what will happen.

The topic of Severance isn't something we have to deal with in our environment, but we do talk about a lot of things in the same way. We're already eager to see what happens in the aftermath of practically everything; Mark has revealed nearly everything to his sister, and Mrs Cobel has been exposed as not being the mild-mannered Mrs Selvig she claimed to be.

When Innie Hellie is revealed to be an Eagan, a true Lumon insider, she declares that she is passionately opposed to just about everything Outie Helena and her entire family stand for, and she vows to bring the corporation down with her. Before she was escorted back into the house, she made quite a statement.

Finally, poor Irv's heart was wounded yet again as he watched Burt live what appeared to be a happy life with someone else. We can only presume that these new developments will have an impact on all three main protagonists, as well as those in their immediate vicinity, in Season 2.

Considering that Season 2 has already promised to reveal even more layers to Lumon, the possibility of a flashback or an entire exploration of the beginning of Lumon and how Kier Eagan (the almost certain cult leader who founded Lumon) persuaded others to join him is a distinct possibility for the following season.

How Many People Will be in the Severance Season 2 Cast?

The Season 2 announcement didn't make it clear whether any of our Season 1 cast members, which includes Adam Scott, Zach Cherry, Patricia Arquette, Dichen Lachman, Tramell Tillman, Britt Lower, John Turturro, and Christopher Walken, would be returning; however, based on the way Season 1 ended, we have to assume they will all be back for Season 2.

What is the Expected Number of Episodes for Severance Season 2?

It is common for Apple's original programming to have stable episode counts throughout its run. Mythic Quest, Servant, and Dickinson have all maintained the same amount of episodes for numerous seasons, with the significant exception of Ted Lasso, which went from 10 episodes to 12 episodes in its second season, which was the most recent increase.

The Premiere Date for Severance Season 2 has been set

There has been no formal declaration of a release date for the second series. Season 1 began on February 18th, 2022, and ended on April 8th, 2022. It was the first season of the show. On Fridays at 12 am PT/3 am ET/8 am BST, new episodes of the series were released, with each new episode dropping at the same time every week for the remainder of the series.

A second season of the show will premiere on April 6th, 2022, according to an announcement made by Apple.

Based on this, we anticipate that the second season will be released in early 2023, probably in February to coincide with the first season's release.

Will there be a Third Season of Severance?

However, if the second season proves to be as popular as the first, we wouldn't be surprised if there are additional seasons in the works following season two.

In an interview with E! News, Ben Stiller, the show's director and executive producer, stated that the show was “a lot of fun.” “It has been a long road to get Severance to television; I first read Dan's pilot more than five years ago and haven't stopped thinking about it since. It's always been a story that would span multiple seasons, and I'm thrilled that we'll be able to continue it.”

Luke Baker is the author of this piece.

Severance is doing an excellent job of world-building, as we're seeing more and more of this version of the world that is essentially ours, but with somewhat different technology, procedures, and big political debates/issues. Severance is also doing an excellent job of character development. A second season of the show will premiere on April 6th, 2022, according to an announcement made by Apple.

How Elizabeth Holmes As a CEO Portrays ‘The Dropout’: Not to ‘Fall from Grace’?

Who is Avril Lavigne to Get Engaged with Mod Sun?