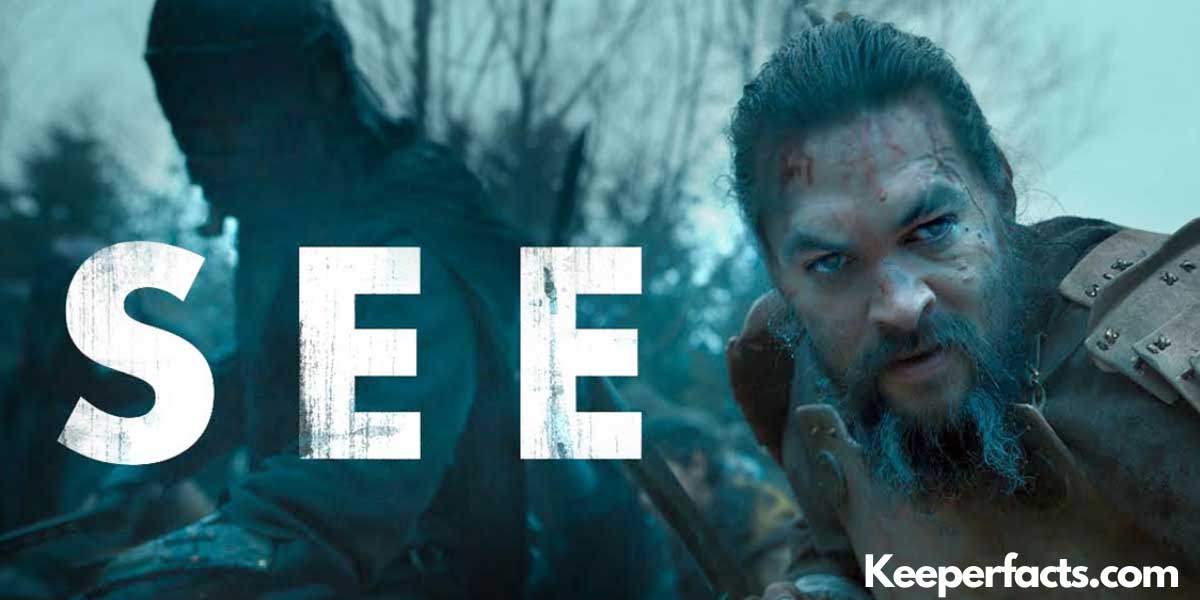 Have you still remembered the fearless warrior and the leader of Alkenny in See Season? If yes, then you also know his name and he is Baba Voss. He has the responsibility to save his family and his tribe from the Queen’s army who are searching for them.

It is an science fiction drama in which all humans survivals lost the vision due to virus which came in early twenty first century.

The title also suggests the meaning that is vision and and in this drama vision or see also takes place several centuries later in the form of two twins of Maghra, a woman who was already 3 months pregnant when she arrived there.

Jason Momoa and Alfre Woodard are the main stars of this see series whose second season aired in August 2021 and now the show is officially announced for the third season renewal in June.

So it is good news for all the fans that season third will also come as it was announced but here we will talk completely about the second season of See which is produced for Apple TV+.

Steven Knight is the writer and Francis Lawrence is the director of this American fiction drama which runs in English language and has 8 episodes in 2nd season.

It is a science drama and sets in a future time where a virus wipes out all humans’ visions and the survivors or the humans have lost their sight and they are trying new ways for their survival and to hunt in the forest.

This science fiction tv series received an amazing response from the audience and it received 7.6 out of 10 ratings on IMDB.

The story of See became interesting when twins of Maghra were born with sight and they two are the only child who can see in that whole area.

The story of season 2 started from where season 1 ends.

Looking for Mike and Sulley, president and CEO of Monsters of incorporated? Do you, also, get lost in the world of anime series while watching them? Read More: Monsters at Work: Know Everything About This Television Series!

The second season of See came on August 27, 2021 on Apple TV+. Then See is announced for the third season but its release date is not announced yet.

The first season of this sci-fiction drama came on November 1st 2019.

There are more characters in season 2 which give support and make the show good.

The Blacklist is coming for season 9 which is an crime and thriller drama in which FBI agent Keen is murdered in season 8 finale. Read More: The Blacklist Season 9: There Is a 2 Year Time Jump in the New Season After Keen Death!

Is There Any Trailer for Season 2 and 3?

Yes, Season 2 official trailer is available but not season 3. Season 3 is only announced and the trailer regarding this come 1 month before the release date.

Till then watch the season 2 official trailer to remind what happened in season 2.

Is See Series on Netflix?

No, it is not available to stream on Netflix.

No, it is not possible for them to wear contactless to show the population in the series blind but they use special effects for this. Contacts are not used due to risk of cornea damage and cost of eye checking doctor.

What Does Chet Chet Mean in See?

It is a signal or a language used by the population when any attack is done upon them.

What is Baba Voss weapon called?

He used his favourite weapon, the hatchet which is bigger than the usual size.

You can steam this series on Apple TV+ and on Justwatch.

Is the See Series Worth Watching?

It is the series whose second season has already premiered and now fans are waiting for the third season and it is good that a new season is announced to come.

Happier than Ever: A Love Letter to Los Angeles

Line of Duty Season 6: What Happened At The End of Show? Where To Watch?