Outlander Season 6 is an American historical fiction which will take you to the fantasy world full of adventure and romance, based on the novel series of the same name written by Diana Gabaldon.

The series focuses on the life of the two lovers belongs to different times. A combat nurse, Claire mysteriously travelled to the past to the year 18th century from 20th century during her second honeymoon in Scotland.

She met Jamie there and later married to her. The series shows the adventure, romance and adversaries of the couple while they trying to change the history. There are a total of 67 episodes till season 5. 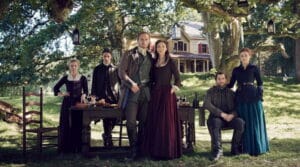 We can say that it is a quite popular series as it has an excellent rating of 8.4 out of 10. The series has also nominated for several prestigious awards and won the “Most Bingeworthy show” at the “Critics Choice TV awards”.

The release date of season 6 is not declared yet, but, surely there will be season 6 of the show, as the show was renewed two years ago for season 6. Season 5 was released in February 2020, so we can expect that season 6 will hit the screen somewhere in 2021.

“The writers are still at work”

The Cast of Outlander Season 6

We cannot expect the show without the four main characters of the show. We will surely see Caitriona Balfe as Claire Randall Fraser, Sophie Skelton as Brianna Randall, Sam Heughan as Jamie Fraser

Richard Rankin as Roger Wakefield, but we will not see Duncan Lacroix as Murtagh (Jamie’s Godfather), as he died in season five.

The Plot of Outlander Season 6

Season 6 will be somewhere based on the sixth book of Diana Gabaldon in the Outlander series A Breath of Snow and Ashes. Nevertheless, it will not the same as the book.

The season five finale left us with several questions that need to be answered in future episodes of the series. For instance,

Will the son of Dougal and Geillis Duncan Buck Mackenzie, present to create problems? Will Marsali feel guilty about poison injection? Will Brianna go to meet her half brother Willam? How will Claire deal with the traumatic event of her sexual assault and gang rape?

Does It Ever Stop? The Wanting You? Even When I’ve Just Left Ye. I Want You So Much My Chest Feels Tight And My Fingers Ache With Wanting To Touch Ye Again.”

Damn Right I Begrudge! I Grudge Every Memory Of Yours That Doesna Hold Me, And Every Tear Ye’ve Shed For Another, And Every Second You’ve Spent In Another Man’s Bed!”

“Oh, Aye, Sassenach, I Am Your Master…And You’re Mine. Seems I Canna Possess Your Soul Without Losing My Own.”

“When The Day Shall Come That We Do Part If My Last Words Are Not ‘I Love You’ — Ye’ll Ken It Was because I Didna Have Time.”

“I Can Bear Pain Myself, But I Couldna Bear Yours. That Would Take More Strength Than I Have.”

We are aware that outlander has lots of rape and sexual violent scene and here a scene from season 5 become controversial where Claire became a victim of gangrape. The scene was explicitly sexually violent and brutal.

According to the audience, the presentation of the scene was of such that it was glorifying sexual abuse and oppression. The creators and actors defended it and explained that it was necessary to explicitly show such violence to make more impact and make the audience aware of the situation at that time. If the scene were not explicit then it would have created a lesser impact over the viewers.

1.Where can we watch the Outlander Season 6?

2.What happened to faith Fraser?

Faith Fraser was the first child of Jamie and Claire. They lost their child because Claire went into early labour when she intertwined to stop Jaime from fighting with Captain Jack Randall. Claire rushed to the hospital, but unfortunately, the baby could not survive. The couple named the baby Faith and buried her in the cemetery of the hospital.

3.Does Jamie die in Outlander?

We saw in season 1 that Frank Randall (Claire’s 1st husband) observed a man was watching his wife, Claire through the hotel window. Later we know that it was the ghost of the Jamie Fraser(Claire’s 2nd husband)

Now the question arises whether the Jamie died and that was his ghost, or he travelled through stones to meet his love, Claire?

The author of the series confirmed that it was the ghost of the Jamie, as he died in the battle of the battlefield of Culloden. We can be more assured that he was the ghost of Jamie from the statement of Mrs Baird to Frank and Claire when they checked in in the hotel that it is the night when ghost can roam around.

If you love to watch the historical drama, then definitely it is a must-watch show for you. The series is consist of different outstanding themes, strong characters, fabulous acting, unique storyline, great direction and cinematography. You will also see romance and adventure. You will fall in love with the beautiful scenes of Scotland.

The third series of Boondock Saints are recently in talk. Fans are suspecting if there will be a third party or not.If you are...
Read more

In this digital world where motion pictures are on the top of the entertainment list, the fanbase of comics is still quite massive. Many...
Read more

Who doesn’t love comedy movies? Of course, everyone does. Whenever we stressed we go out for looking fun. So, if you are someone who...
Read more

What is growth? If you wanna know what actually growth is then see the series Letterkenny. This show is going from a regular show...
Read more

You may be a fan of Primal or out of curiosity search for it. So, now you have decided to read this article We...
Read more

In this digital world where motion pictures are on the top of the entertainment list, the fanbase of comics is still quite massive. Many...
Read more

The top-notch entry of the Mission Impossible series which are a bucket full of thrills, twists, turns, and lots of action. It's time to...
Read more