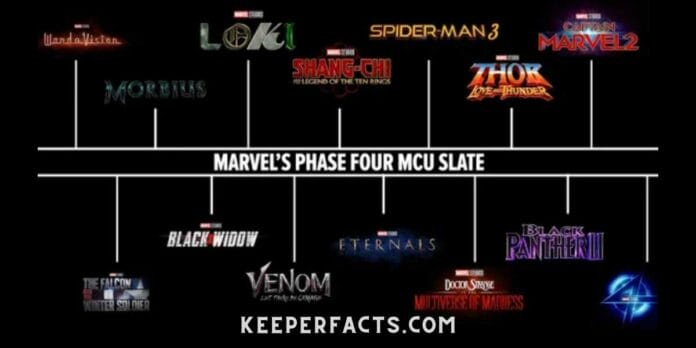 For those who are unaware, Marvel Phase is a combination of superhero movies and tv series. It is based on Marvel comics and produced by Marvel Studios. The first phase hit the screen in 2008 with Iron Man and came to an end in 2012. The films and tv series received a positive response from every corner of the Globe and generated revenue of more than $3 billion.

Now Marvel Cinematic Universe is all set to land Phase 4. Below are the details of MCU phase 4.

Shang-Chi and the Legend of the Ten Rings

The movie will be about Shang-Chi, who forcibly became the part of secret Ten Rings organization. It will reflect his past. It is set to release on July 9, 2021.

The film will be about the Eternal, eternal aliens who have existed on Earth for the past 7000 years. Eternal is protecting the Earth from Deviants. The story of Eternals is after the Avengers: Endgame (2019). It will be released on November 5, 2021.

It is a third Spider-Man movie. It will depict the life of Peter Parker in senior high school. It will release on December 17, 2021.

Doctor Strange in the Multiverse of Madness

Chris Hemsworth nailed the role of Thor. It will be the fourth movie depicting the life of Thor. Initially, there were no plans for the movie. But, after the endgame, Taika Waititi signed to write and direct a fourth Thor film. It is expected to hit the screen on May 6, 2022.

It is a direct sequel to 2018 Black Panther. It will depict the life of Black panter in Wakanda. The movie is scheduled to release on July 8, 2022

Guardians of the Galaxy Vol. 3

In December, the creators have announced the movie. But the expected has not been revealed so far. But the movie is likely to come late in 2023.

The Falcon and the Winter Soldier

The creator announced the series back in 2019 and the shooting was also started back then. But due to the global pandemic of coronavirus, the production of series came to halt. The production of the series continued in early September 2020 and came to an end in December. The series depicts the events after the endgame. The series is expected to hit the screen on March 19, 2021.

The series is set following the events of Avengers: Endgame.

It depicts Loki when he got trapped when he went behind the Tesseract. The filing of the series has started in 2019, but the production came to halt due to coronavirus. But now, the production has resumed and is scheduled to release on June 11, 2021.

As the name suggests, it will depict the consequences if certain few events from the Marvel Cinematic Universe (MCU) happened otherwise. It will be based on What If comic book. But, unfortunately, the production of the series came to halt. The series is scheduled to release in Mid-2021.

The series focuses on Jeremy Renner as Clint Barton / Hawkeye. It will depict the Bartons as Ronin Shooting and will also depict Black widow. The series is set in Atlanta. It will likely premiere at the end of 2021

Marvel Studios announced the development of the series in 2019. It focused on Marc Spector / Moon Knight. The series will consist of six episodes. The shooting of the series will begin in late March 2021 in Budapest and it is scheduled to premiere in late 2022

The series will focus on the cousin sister of Bruce Banner. She will get the superpower of Hulk after her blood transfusion. It stars Jennifer Walters. The series will consist of 10 episodes and will premiere in late 2022

The Guardians of the Galaxy Holiday Special

James Gunn is the director and creator of The Guardians of the Galaxy Holiday Special. The main cast from the movie will return for sure. The filming of the series will begin in late 2022.

Read More: The Tick Season 3: Why There Won’t Be Season Three?

The series focuses on Nick Fury and Samuel L. Jackson. It is based on the Marvel comic book having an identical name. The shooting of the series will start on April 2021 in Los Angeles. The series will consist of six episodes. The studio has not revealed the exact release date so far.

The series will be about Riri Williams. Marvel Studios announced the development of the series in December 2020. The creators have not revealed the exact release date so far.

It will be based on the Armor Wars comic book that shows the greatest fear of Tony Stark when his technology fell into dangerous hands. Don Cheadle will return as James Rhodes. The shooting of the film is scheduled to start in 2021.

The series is set in Wakanda. We will see the Black panther in the series. The shooting of the series has not been stated so far. Therefore, we don’t have any release date so far.

Well, as soon as we get more updates, we will inform you.

The Politician Season 3: What About The Official Release? Know Here!

Jett Season 2: Is The Show Really Cancelled Or Are Just Fake News For “Attention”

A Discovery of Witches Season 2 is Coming Up!

Natalie - 06/01/2021 0
Demon, Witches, Vampire, Do you get Goosebumps every time while listening to these names? Is Twilight is your favorite movie? Do you watch it...