Look Both Ways Release Date: Lili Reinhart Has a Tremendous Story for Her Fans!

Fans of Lili Reinhart will be delighted to learn that she will make an appearance in the upcoming Netflix film “Look Both Ways.” Look Both Ways will be available starting on August 17, 2022.

Natalie, who is on the verge of graduating from college, will be portrayed by Lili Reinhart. In the film, her character—an aspiring artist—is at a crossroads where two possible outcomes for her life are depicted, depending on the outcome of an incident that occurs the night of her graduation celebration.

The film Look Both Ways will be directed by Wanuri Kahiu, who has expressed a strong interest in the project since its inception. She has previously won awards for her work, and the audience is eager to see what she brings to the table with this film.

Brief About the Movie

What if? is the first word in every query she is posing to herself. She poses a profound question, “Can a single instant transform your life?” and then she can be seen putting together pregnancy test kits. After that, the trailer skillfully illustrates how the main character's life may go in one of two ways depending on the results of the pregnancy test she takes.

One result demonstrates that the test was negative, whereas the other, of course, was the test being positive. On the one hand, she is shown as moving to Los Angeles to achieve her goals, where she hopes to work with her hero, Lucy Galloway. At the same time, she strikes up a friendship with a coworker and begins a love connection. 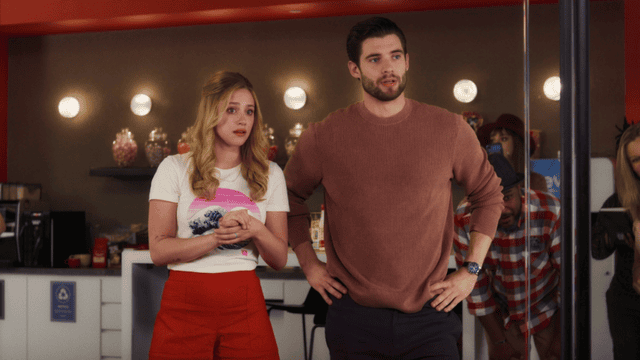 On the other hand, the fact that she is pregnant prompts her to travel to Austin, where her parents reside, so she may introduce them to the father of her unborn child. She may have a little family with the father of the child, but she is left wondering where her life has led her since she hasn't seen her friends in a very long time or done the activities she used to do.

The protagonist asserts that your life is made up of all of your moments rather than just one, and both results are well displayed.

What Is the Release Date of “Look Both Ways”?

According to collider Look Both Ways' official release date was announced earlier, and it is set to premiere on August 17, 2022. Look Both Ways will be available on Netflix worldwide.,

Who Would Appear In this Movie?

By now, everyone is aware that Lili Reinhart plays Natalie, the main character of the film Look Both Ways, who is on the verge of graduating from college at the start of the story. She gained notoriety for her performances in the films Chemical Hearts and Riverdale.

In the film, Danny Ramirez will play the role of Gabe, a love interest for Lili Reinhart who will be portrayed by Danny Ramirez. Danny gained notoriety for the film “The Falcon and the Winter Soldier.” Below is a list of the movie's cast members.

The actress is most known for her role as Betty on The CW's Riverdale. She is also recognized for her roles in the movies Hustlers and Chemical Hearts. Gabe, her buddy with whom she had a child, is played by Danny Ramirez. He was recently seen in Top Gun: Maverick and The Falcon and the Winter Soldier.

Natalie's new love interest in Los Angeles is David Corenswet. The actor previously collaborated with Netflix in The Politician and Hollywood.

You May Like:- When Amphibia Season 3 Will Air Out and Where You Watch it ?

Look Both Ways: What Can You Expect?

The film's title implies that we'll get to observe the protagonist's dual personality in all its complexity. When she finds out whether she is pregnant or not at her graduation celebration, we'll be watching both sides of the room to see what direction her life takes. She's about to start a new chapter after all.

Look Both Ways' teaser has convinced us that the movie is going to be terrific. Both the actors and the director have impressive resumes. The combination of these two factors, as well as a compelling plot that focuses on women and their many stages of life and how they deal with challenges no matter how great or small, bodes well for this next Netflix feature.

Must Read:-Sintonia Season 4: Here is the Status of Its Release Date!

This is a part Lili Reinhart has never played before, so it would be interesting to watch her in it. Overall, this film is likely to live up to expectations and provide a nice time for those who see it.

The official trailer for Look Both Ways was published a while ago, and at the very beginning, we hear Lily Reinhart converse with the audience, asking them whether they had ever pondered how things would be if people just went after anything that came to mind, every ridiculous notion or wish, etc.

10 Most Popular Disney Villains: Here You May Find Your Childhood Memory?

Chrissy Teigen Pregnant: She is Extremely Happy as She Expecting a Baby After Losing Her Son “Jack”