Into The Night Season 2: Everything You Might Be Looking For| Release| Story And More

Season 1 of Into the Night is split into six 40-minute episodes. Each episode delves into the backstories of notable passengers while also defending their behavior and goals in the real world. Because it is based on Jacek Dukaj's Polish science fiction novel The Old Axolotl, the series follows a novel's plot.

INTO THE NIGHT: SEASON 2 PLOT SUMMARY

Season 2 covers the backstories of the live passengers before they boarded the plane in a similar narrative approach. Zara Oblonskaya and her sick son Dominik are at the center of the narrative.

Zara informed a fellow traveler, Ayaz, in Season 1 that she came to Mexico for her son's treatment before the world was destroyed. In this schedule, 9 days in the bunker were used by passengers to acclimatize with the military soldiers to the subterranean life.

The sleeping pattern was adjusted according to the drama, waking up at night and sleeping throughout the day. The people, the forces and NATO diplomats are trying to identify methods to stop the damaging sunlight.

In the meantime, Ines Ricci is a fellow crew member and Herman’s a military soldier, and they burn stock food in their brawl.

The military leader Colonel Lom recommends that they travel to the subterranean seed vault in Norway and grow food in a bunker because of the fewer food and nothing on the surface that gives them sustenance.

Colonel Lom puts up a squad that includes Ayaz to go to Norway. Zara contends that Ayaz is not being sent on a dangerous assignment with Lom out of protection. Colonel Lom discreetly endangers the people in the bunker by the military command of the facility and is forced to obey its instructions.

This disagreement represents the start of a continuous struggle between the army and citizens, which is the main battle of Season 2.

INTO THE NIGHT: SEASON 2 SPOILER-FREE STORY

As a brief memory of the narrative, Into the Night presented us to a group that did not know one another and found that the sun's radiation was fatal. Into the Night.

The only way they can live was by flying and avoiding sunlight until the only safe spot is found: an underground bunker for the catastrophe. The tale goes on immediately after the events of the first season. In the military bunker, supervised by a number of troops, the group of survivors discovered sanctuary, not all of them enthusiastic about the newcomers, because they need more rationing and finding room for everyone.

Each of the characters must face its own inner and imminent demons, which, although a sign of redemption typically, is not the cure but reflects the problem figuratively and ironically.

The troops so proceed to symbolize the ancient memory's “others,” causing even more conflict and friction among the survivors, who, if they were already dealing with internal difficulties while attempting to survive and resist what was going on, now have a “enemy” to contend with.

If the first season's episodes focused on the male cast (except from Sylvie, who had started it all), the second cycle's episodes instead focus on the female protagonists, with some new additions like Gia, a bipolar woman played by Marie-Josée Croze, who was recently seen in Mir.

The episodes are slightly shorter in length (about 30 minutes instead of 40 minutes), which heightens the suspense, but the realism is a bit less in the fast resolution of some of the group's difficulties, while other moments are handled in an overly inflated and melodramatic manner.

As with the previous season, there are six new episodes, each focusing on a different character whose life before the disaster we saw before returning to the current day, where the survivors are attempting to float in the face of a sea of adversity. The protagonists are “Zara,” “Laura,” “Ines,” “Gia,” “Thea,” and “Asil.”

INTO THE NIGHT: SEASON 2 – REVIEW

By Into the Night, created by Jason George, who has written all of the episodes again, we hope for a third season because we find ourselves with a very open ending and implications that could leave us a little perplexed, because perhaps they could have found a resolution for some storylines in this second season. The clash between the military and the civil-diplomatic side (there are also two ambassadors) will result in unexpected new deaths and new revelations about the characters' past, but also about their present, who will have to deal with atrocious losses and the realization that there may be no hope to “heal” the sun.

In a season that appears to be more “passing,” as it often does, the series appears to travel around in circles to return virtually to the starting point. One of the most focusing on the importance of Into the Night is that it does not hesitate to get rid of as many characters as required to advance the plot: you do not have to grow fond of any of them because, despite the brief episodes they struggle to understand, the important thing is the story and how it emerges. 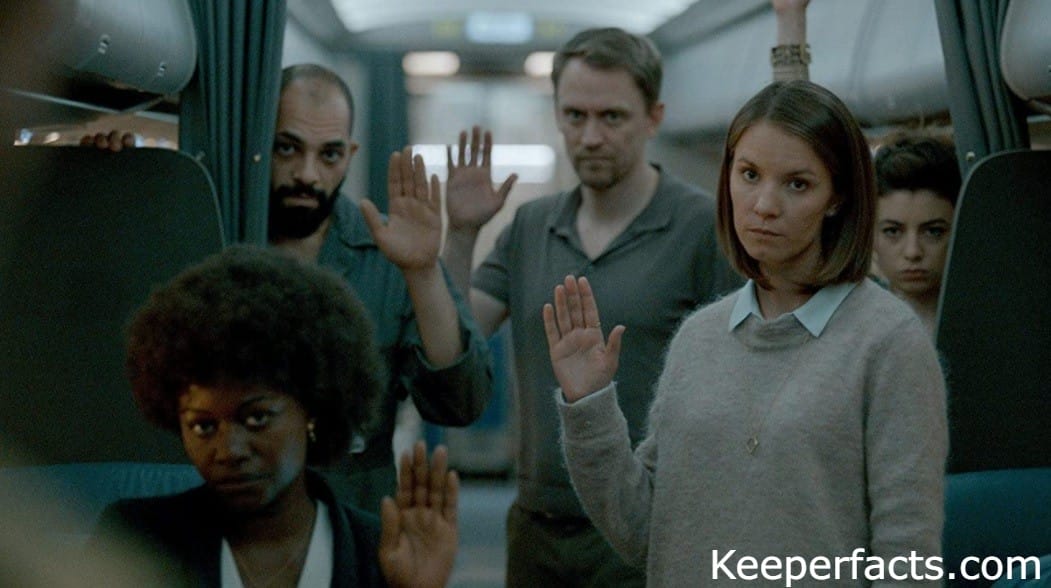 At the end of our review of Into the Night 2, we can be satisfied with how the qualities that had made the first season's fortunes have been maintained in the new six episodes, slightly shortening their duration, introducing some new entries, and the meeting-clash with the soldiers of the bunker and their “military logic” very different from the civil one but perhaps a little too evocative. The episodes this time are concentrated on the female characters, without ignoring anybody on the whole, although the tale turns a little in vain, returning practically to the beginning in a maybe overly open and unsatisfying finish.

INTO THE NIGHT: SEASON 2 ENDING EXPLANATION

Captain Mathieu, Ayaz, Osman, Jakub, Markus, and Ambassador Bisset boarded an Airbus A318 bound for Norway. They did, however, meet a crazy lady named Gia Snow in the seed storage facility. Gia became nervous and locked herself in the cockpit as the crew carried the seeds into the plane.

In her panic, she damaged the plane's controls, making Mathieu's flight out of Norway impossible. They became stranded in the ice country.

Meanwhile, Felipe and Heremans discovered a pen drive in Lom's pocket while preparing his body for burial in the bunker. They found through CCTV footage that Sylvie tied a NATO officer, Terenzio Matteo Gallo, beside the gate and left him to die in the open sunshine. Felipe utilized the facts to revenge Sylvie and other citizens who spoke out against oppressive military forces.

Felipe detained Sylvie and the other passengers and began tormenting them. Eventually, Sylvie, Laura, Ines, Rik, and Horst managed to flee. They intended to flee Bulgaria in a Russian-supplied chopper, but Rik had to give his life to keep the military perpetrators at bay.

He eventually became a hero in his own life. Ayaz kept Markus at gunpoint inside the seed storage facility and informed him about his confession letter, which he delivered to Ignis before leaving the bunker.

Colonel Lom, according to the letter, directed Markus to confine Zara and Dominik to the generator room in order to terrify them. To take revenge, he orchestrated the plan. However, when Markus and Lom learned that there was no replacement key to the generator room, they realized that their joke had gone too far. Lom suffered poetic justice when he was accidently shot, but Markus, who was equally guilty for the act, needed to pay his debt, as Ayaz emphasized.

Finally, Ayaz aimed the pistol towards Markus, but a stranger from the submarine abruptly ran into the cold storage facility. Before the screen faded away, an angry Ayaz shot the stranger.

PREDICTION ABOUT “INTO THE NIGHT: SEASON 3”

In Season 2, an unknown missile damaged the Bulgarian airport and the Russian plane, preventing both countries from travelling to Norway to recover the seeds from the facility. Felipe and the Russian soldier speculated on the identity of the third armed unit but came up empty-handed.

They did, however, speculate that this third group may be a part of a European country because they were able to readily intercept radio communications regarding their plans for Norway. It might be the men from the submarine, but the reality will be revealed in Season 3.

Mathieu and his seed mission team were trapped in Norway. Ayaz fired a shot at the man from the submarine, and if those individuals sought vengeance, they would undoubtedly endanger civilians. Sylvie and her party, on the other hand, boarded a helicopter to rejoin the group in Norway.

If they made it safely to the ice country, they'd undoubtedly find out how to survive since that's what they've been doing all along. Season 2 gave out important information about a rat that withstood the sunshine before it faded out. Horst and Laura have been experimenting with rats and leaving them out in the open since the beginning of the season to see if they can withstand the sun.

Dominik, who observed a rat-like critter (a Guinea pig or a hamster) at a hospital in Brussels after a horrible catastrophic event hit the earth, inspired their research. The mouse that had survived the sun was encased in a frozen tin jar. As a result, it is possible that, like water, ice functions as a barrier against damaging sunlight. It was the beam of hope that everyone needed to escape the apocalypse. At the end of the tunnel, season 3 follows the light.