Hobbs and Shaw 2 is going to release soon, here is everything you should know 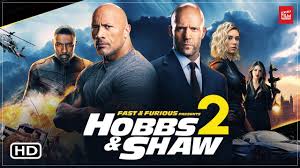 It’s going to be 1 year since Corona hit the world with it’s trap. Since then we started to find our happiness in home. With work, studies and entertainment been digitally access we are using our time by watching movies and web series.

“In life, things happen. You may not want them to, but they do.” – Luke Hobbs

Due to this many movies production has stopped and now we have to wait more for their release. But a ray of hope emerges when Dwayne Johnson revels some news regarding the movie Hobbs and Shaw 2. The fast and furious present Hobbs and Shaw is well praised by the critics.

Moreover the fast furious franchise has gained a lot of popularity over the past 10 years. With the beginning of the Era, they releases the crime – thriller street racing series. With such a huge popularity of the movie they started to widespread their movies and story.

The main character of Hobbs and Shaw, Dwayne Johnson and Jason Statham who became an important character of the series. They firstly joined in Fast & Furious 6 and Fast fives.

Dwayne Johnson and Jason Statham the main character of the movie worked as a titular duo. To clarify they are they are DSS agent Luke Hobbs and British special force Assassin turned mercenary Duke Shaw.

Firstly, they are forced to work together in order to find Shaw’s sister. He have a sister named Hattie and she was a MI6 agent. Hattie was falsely accused of stealing the deadly virus which can destroy half of the humanity. The ending part of Hobbs and Shaw already clarified about the sequel.

The storyline as well as the acting is great. That’s the reason the movie got a great reviews. Let’s see what us going to happen in it’s next part.

What do Dwayne Johnson says?

So Dwayne Johnson recently gave a huge news to the fans. He took his Instagram profile and told the fans that Hobbs and Shaw 2 is officially under development.

Dwayne Johnson (The Rock) held a QnA session on his Instagram live and one fan asked about the sequel of Hobbs and Shaw for which he replied,

“ We are developing now the next film, the next movie and I am pretty excited about it. Just gotta figure out the creative now and the direction we’re going to go”

He furthermore added that this part is going to have more thriller and full of action than its previous part.

When the movie first part which was Hobbs and Shaw released, they made $760 million dollars worldwide with a budget about $200 million. With the gross of this much, we can expect the movie maker to make a sequel.

The Universal didn’t confirm any news or updated anything regarding the movie but as the main character already told this to the people, we can accept this to be an Official announcement.

What is the Release date?

The Fast and Furious present Hobbs and Shaw 2 is confirmed to began in work but there is no official news about the release date. Chris Morgan started to pen down the movie we have to wait little more for this movie or you can keep an eye on Dwayne Johnson maybe he will give some more news.

Keanu Reeves is going to cast as a villain?

When the first part of movie, Hobbs and Shaw released during the time a rumor were spread that Keanu Revues is going to cast as a main antagonist of the movie. But we haven’t seen him in the movie. But now fans are speculating that he is surely going to be in second part.

If you have already seen the movie, the voice during the ending part sounds similar to keen Reeves. So, we can expect him to be in the second part. People are already loving tee idea of him being the villain. And we can also assure you already that if this happens the movie is going to have a blockbuster hit in the box-office.

Ryan Reynolds is going to have a bigger role?

Who doesn’t love Deadpool? With the comedy and sarcastic nature of this character everybody loves him 😊

So the actor behind this amazing acting is our Ryan Reynolds and it is confirmed that he us going to have a bigger part in the movie. According to sources, Ryan Reynolds is going to officially cast in the next movie if Fast and Furious: Hobbs and Shaw with a bigger role. Except this nothing is officially announced yet.

How fans reacted to this news?

“I have just finished watching the furs part of the movie and then I got to know that there will be second part too. THIS MADE MY DAY 😭”

“The best action movie about friendship”

To summarize all this, we know that the movie maker already given a green light to the movie but not release any statement regarding it’s release. We have to wait till any further information to come up. We have tried to make this article informative, but if you still have anything in your mind then ask us in our comment section below, we would love to clear your queries.

A student, who is inquisitive and believes in growth. Reading novels and watching Web-series are the two things which I love to do. Other than that I love my lil Dog, Casper. You can contact him at [email protected]

Taboo 2 : Everything You Should Know About It

What Are the Series of HONOR Phones?