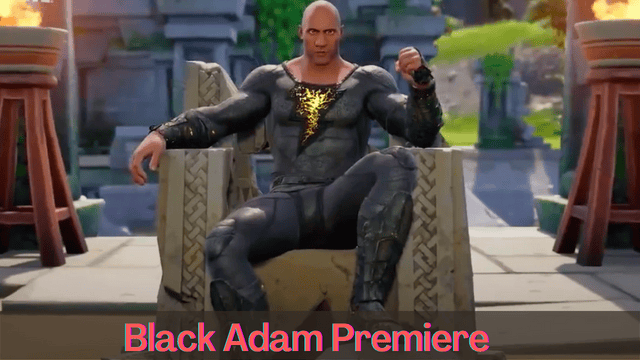 A new Black Adam skin will be accessible in Fortnite, according to tweets from Epic Games and Dwayne Johnson. The new clothing will be available for purchase via the in-game item shop along with a variety of cosmetic accessories, including a pickaxe, back bling, emote, and more.

On his official Twitter account, Dwayne Johnson, who will play the anti-hero Black Adam, announced the new Fortnite skin and shared a brief video showcasing the new partnership.

This is where we might learn everything we need to know about the Black Adam skin, including its price, the range of companion cosmetics, the possibility of companion quests, and, of course, the skin's actual release date.

It's possible that we won't have to wait too long for the skin to appear on the Fortnite Item Shop given that the Black Adam movie will be released in the near future in the majority of regions, with its premiere scheduled for October 20 in the United States.

Tune in TOMORROW to the #BlackAdam WORLD PREMIERE livestream on Twitch @ 6:30PM ET and catch the bad ass reveal of the #ManInBlack in @FortniteGame!

On October 11, The Rock himself made the announcement on social media. The actor announced that a major unveiling is scheduled for October 12 at 6:30 ET while displaying a brief teaser clip for the skin that also showed off what appeared to be a black bling and even an emote.

Hollywood actors frequently appear in Fortnite as distinct characters or in different personas. Tom Holland, who has two skins in the game—one as Nathan Drake from the Uncharted movie and, of course, as Spider-Man from the MCU—provides a quick illustration of this.

A pickaxe, outfit, back bling, pick, and emote will be brought by Black Adam to Fortnite. In the unveiling trailer down below, you can see the majority of these in action. The Emote's built-in status, which would lock it to the Black Adam skin, is unknown. The player appears in the emote sitting on a throne and appears to be quite powerful.

The Three Pyramids of Egypt are the Back Bling, signifying Black Adam‘s ancient Egyptian ancestry. The Back Bling appears to be reactive as well because the trailer demonstrates how electric it is.

The Pickaxe resembles Hawkman‘s Mace in appearance. It's unclear if this has anything to do with a specific scene in the film.

Is Manoj Bajpayee Dead or Alive? Know All the Updates Here!